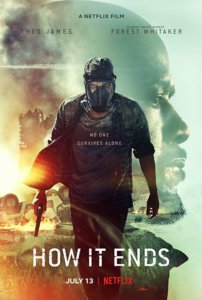 Movie Title: How It Ends

Trailer: How It Ends Trailer

The Beginning starts off pretty good

This movie definitely got me thinking again about the possibilities of something like this happening in the US and around the world.  It is entertaining.   It did keep my attention.  This world (especially in the U.S.) is so dependent on our electricity, water, the internet, cell phones, etc. that a disaster that took down anyone of these could leave this spoiled country in shambles.

The young couple in this story have just found out they are going to be parents of a little boy.   Sam (the girlfriend) and Will (the boyfriend) have not told her parents yet and there is obviously a ‘not so good’ relationship between Will and Sam’s dad, Tom.   Tom is a retired career military man and he is tough on Will.   Sam is his only daughter and he wants the best for her and doesn’t fell Will can provide that.  Lots of obvious tension there.

Will has to make a business trip to the city where Sam’s folks are and goes by to have dinner with them, leaving Sam at home in Seattle.  The dinner didn’t go so well and Will leaves her folks to head to the airport to fly back home.  He is on the phone with Sam when there is some major noise and ‘she says something is wrong’ and they lose their connection.

Next thing that happens is the power goes out, the internet goes down and it happens all over the U.S.

There are obviously no flights leaving so Will makes his way back to Sam’s folks house.   Her parents, being former military, are somewhat prepared for an event like this.  They have ‘go bags’ and are gathering more to go in them.  They had tried to reach Sam, as well, and couldn’t.  Tom is going to try to drive to Seattle.  (This is a long, cross country trip.)  Sam’s mom is being sent to some family’s home and Tom asks Will if he is going with him to find his daughter.   Reluctantly Will says yes.  Not that he didn’t want to go find Sam, just the thought of hours alone with her dad did not appeal to him.

There are many suspenseful and creepy events that occur during the trip to Seattle.  Car accidents, death, demolished homes and buildings, thieves and murderers, yes they are all there.

So you keep holding on, watching, trying to see what is going to happen next and expecting an answer as to what has actually occurred.  What cause the power grid and the internet and so forth to go down?  The manage to keep you holding on as you see Will and Tom become closer during the crisis.  Ok that was good.   There are tragedies along the way with Tom and Will and a girl mechanic, Rikki,  (Grace Dove), who they pick up and take with them in case they need car repair assistance.  And then when Will finally makes it to Sam their ‘friend’ who has been keeping her safe has turned ‘wacko’ and tries to kill Will.  You don’t really see a lot of other people…you don’t know if they will survive and how.  There is still an apocalypse so now what? 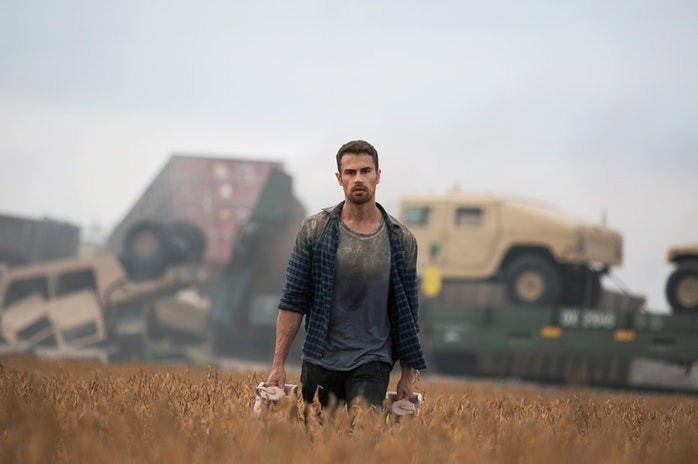 I have to agree with many others whose reviews I read.  The movie had some character but left you feeling very empty at the end.   You don’t find out if this was an attack by terrorists or someone in our government or what caused the apocalyptic event.   You don’t find out anything.   It just abruptly ends!

Some are asking did they run out of money and just cut the movie short?   Are they trying to leave it open for a sequel?

I guess the truth is that it could end like that.  I mean we could just all die off and only a few survive or none survive.

There were definitely a number of gaps in the story which should have been filled in.  Lots of missing pieces and then no definitive conclusion. For a movie that had a lot of potential it left you feeling like you had just wasted.

My rating is a 6 out of 10.  Fair movie but there have been other much better Apocalyptic movies.

The movie did, as many apocalyptic movies do, reminding me once again that at any time this type of tragedy can occur.  We walk around in our daily routines, not suspecting tragedy and it can happen at any moment.  We think for the most part that we are safe.  Even when all around us there are burglaries, murders, serial killers, bombings, etc.  We are dependent on all these luxuries we have.

We need to be trained in survival folks.  We need food and water storage, weapons, training on how to defend ourselves.  We need ‘go bags’ prepared at all times to make a run for it!  We need to be prepared ‘just in case’.

If these type of movies do not end with a happy ending…perhaps it is just a reminder that life doesn’t always end in a happy ending.

Please leave comments below related to this review.  We welcome your comments!

Please note that by submitting a comment you are also consenting for us to store your info from this submittal in our records. We will not furnish this information to any third parties. It is just stored in case we need to contact you. Check out our Sister Company!